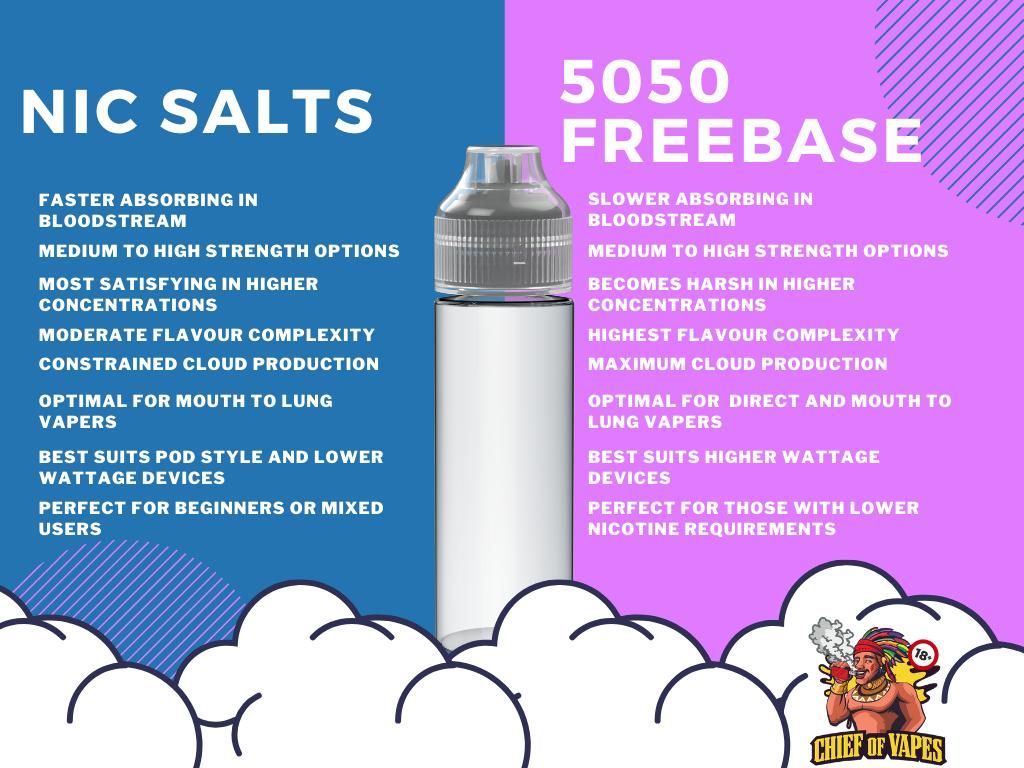 We’ve witnessed huge innovation in the vaping industry over a short period of time. So how exactly have Nic Salts revolutionised the game?

Nicotine Salts (commonly abbreviated to nic salts) have been around in e-liquids for a couple of years now. Yet have only recently exploded in popularity as a monumental vaping innovation. Let just get this straight now also, Nicotine Salt contains NO Salt and will not influence your sodium intake.

Their popularity in particular initially rocketed in the US, closely linked to the JUUL closed vaping pod system which packed a powerful punch of 50% nicotine salts based e-liquid in America. Only lately has this been available in the EU thanks to the stricter regulations set by the Tobacco Products Directive, which sees maximum nicotine levels capped to 20%.

In response to this rapid rise in popularity and demand, we’ve extensively researched and developed our own nic salts e-liquids range to be amongst the most innovative in the world. We’ve carefully crafted this guide to help you fully understand nic salts, so that you can make an informed decision about whether they’re the right vape for you.

It’s best to also properly understand the most common alternative form of nicotine available – freebase, to fully explain the differences to nicotine salts.

The freebasing process involves changing nicotine from its ‘salt’ state which occurs naturally, into its base ‘purest’ form. This way of increasing potency, without increasing the dose is why it’s popular amongst vapers as it can potentially make for a more cost-effective solution. As the name suggests the salt protons are stripped away using ammonia (an alkaline) which raises the pH level and modifies it to a deprotonated ‘freebase’ state.

However this may not provide the most optimal experience for all vapers, so why exactly would some vapers benefit from using nicotine salts over freebase?

Most vapers share the common goal of wanting the sensation they get from vaping to most closely replicate that of smoking a cigarette. Hence to function most effectively, the delivery of nicotine has to replicate that of a regular cigarette as efficiently as possible.

Previously vapers only had the option of having freebase nicotine in their vape juice, which with its higher pH value is more on the alkaline end of the spectrum meaning users can find it harsh in higher doses.

Depending on the users previous smoking and vaping experience, a high quantity of freebase nicotine can deliver a throat hit too severe to fully enjoy. The consequence of this is newer vapers would often reduce the nicotine content of their liquid, to be gentler on their throat.

However this can prove very risky in cases as by reducing nicotine levels too quickly there’s a high risk they may be tempted to relapse back onto cigarettes when they’re not getting their early intense cravings satisfied.

There is the alternative also of taking more drags from their vape so the cravings are satisfied, however this results in more e-liquid having to be used which diminishes the cost savings promised which can prove demotivating.

Hence when developing our Nicotine Salt E-Liquid ranges we wanted to find the optimal trade off point between wholly satisfying nicotine cravings, and getting a silky smooth vape experience that can be used as frequently as needed. First we’ll give you a full run through on what a nicotine salt actually is, before revealing the secret we discovered to achieve it.

We’ll begin by most importantly clarifying, it is NOT based around common sodium chloride also known as table salt. Therefore it won’t make your vape juice taste salty, or increase you’re your sodium intake.

The term comes from chemistry, where a salt is made up of a chemical reaction containing both a positive (acid) charge and a negative (base) charge.

In tobacco leaves the nicotine which occurs has the chemical composition of a salt. More importantly perhaps tobacco leaves only contain nicotine in its salt state, its these exact nicotine salts that are then chemically modified to produce freebase nicotine.

Yet interestingly nicotine salts chemical composition has a week base which seeks out positively charged particles (protons) so that they can become stable (ionised). Since ions have difficulty moving through our cell membranes, its hard for them to reach our bodies nicotine receptors.

Unmodified nicotine salts that could be added to the PG/VG that makes up e-liquid, would need to be vaped at extremely high temperatures for the nicotine to become effective. Even if that were possible, absorption of nicotine would still be inferior to its freebase equivalent. Hence to make it most effective for vaping, nic salts still need a touch of chemical tweaking themselves.

Whilst a chemist might love to hear all the technicalities we could throw at you now about how we perfected our formula, we don’t want bore or overwhelm you with exactly how we changed the molecular breakdown (but please drop us a message if you do). To make a long story short, it all comes down to pH levels.

Our clever scientists in the lab theorised that to make the most vapable nicotine salts, you need to boost the acidity of the nic salt you can deliver higher doses of nicotine without straining the throat as much.

Acids and nicotine bond well together, and there’s certain acids that naturally occur in every cell of the human body which we’ve discovered make nicotine salts very effective when vapourised.

In our e-liquids we use Benzoic and Citric acids depending on what’s optimal for the nic salt flavour, to deliver three undeniable benefits:

Through optimising the nicotine salt like this, we are able to deliver the most similar concentration of nicotine to the bloodstream as a regular tobacco cigarette would, also crucially in a similar time period.

The Nic Salt vs Freebase battle

Since you’re now clued up on the science, we can swiftly compare the key differences between freebase and nicotine salts so you can decide which is best for you.

Is there any difference in safety?

When it comes to differences between having nic salt e-liquid and freebase nicotine vape juice, there only one and it’s the added Benzoic or Citric acid. Since both naturally occur in our bodies, nicotine salts are going to be no safety is compromised to its freebase counterpart.

Furthermore the World Health Organisation’s renowned International Program on chemical safety also advises that humans consume a maximum of 5mg of theses acids per kilogram of bodyweight per day, this works out to roughly 420mg for the average 84kg UK man, or 350mg for the average UK woman. Given that 1ml of nic salt vape juice contains just a few milligrams of Benzoic or Citric acid, its virtually impossible anyone would be able to vape such a dangerous amount.

Which should I choose?

If any of the following statements apply to you, then nicotine salts would be a suitable choice:

This guide should have hopefully provided you with everything necessary to make an informed decision about which nicotine e-liquid variant is best for you. However if you still have unanswered questions, please don’t hesitate to contact the chief for further impartial expert advice and guidance.

If you require any more information regarding Nicotine Salts or Freebase Nicotine Products, please contact us.

If you want to know more about us or have more questions please go to our FAQ Page.

Need Help? Come Chat With Us!
👋 Hi, how can we help you?
Ask the Chief for Help
Menu

LET ME IN
GO BACK